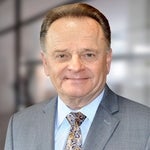 Get to Know Attorney Bruce Brusavich

Bruce Brusavich co-founded AGNEWBRUSAVICH when he was 28 years old. Since the firm's inception, he has represented thousands of individuals and businesses in a variety of areas, including personal injury, insurance bad faith, business litigation, elder abuse, professional malpractice, product liability and wrongful death.

With more than 100 jury trials, clients rely on Mr. Brusavich for sound legal counsel and to protect their rights through every phase of litigation. Due to his extensive knowledge of the law and litigation, he often teaches other attorneys at Continuing Legal Education programs, testifies before the state legislature, and serves as an expert witness in legal malpractice cases.

Mr. Brusavich is the Past President of the Consumer Attorneys Association of Los Angeles and Consumer Attorneys of California, where he led efforts to reform the summary judgment statute, create a two-year statute of limitations, improve the administration of justice, and maintain trial court funding, among other initiatives.